What is a posterior vitreous detachment (PVD)?

The vitreous is the clear fluid that fills the inside of your eye. It consists of 99% salt water and 1% collagen and other molecules that give it its thick gel-like consistency. Beginning in the teenage years, the vitreous starts to liquefy and gradually separate from the retinal surface. As we age, the vitreous gel eventually completely peels off of the retina. This event is called a posterior vitreous detachment (PVD). A PVD can also occur earlier in life with nearsightedness, following trauma or surgery, or with inflammation inside the eye.

What are the symptoms of a PVD? 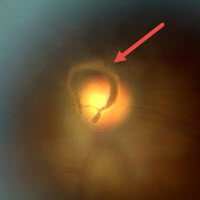 Posterior vitreous detachment (PVD) A PVD initially causes flashes as the contracting gel tugs on the retina. As light passes through the condensed gel, it casts shadows in front of your vision. These floaters appear as small moving specks or clouds that may have variable shapes, including small dots, cobwebs, clouds, or lines. They are often most noticeable when looking at a plain blue background, such as a computer screen or blue sky. The flashing lights generally go away completely within several weeks to months. Although the floaters are usually permanent, they almost always become less noticeable over time.

Does a PVD need to be treated?

A patient with sudden flashes and floaters needs to have an urgent dilated eye examination. If they have a new PVD, there’s a 10-15% chance that they can develop a retinal break or detachment. This will usually occur immediately or within 2-3 months. The vast majority of PVD’s require no treatment if a break or detachment doesn’t occur. Rarely patients will have non-resolving, very symptomatic floaters that can be successfully removed with vitrectomy surgery.