The Many Types of Glaucoma and What Makes Them Different 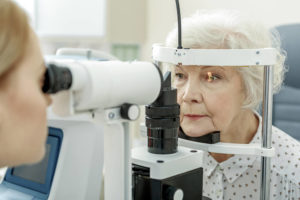 Glaucoma is an eye disease that slowly, or sometimes rapidly, causes vision loss and blindness. It does so by damaging the eye’s optic nerve, which transports electric impulses to the brain. The concerning part about this disease is that there are virtually no symptoms until permanent vision loss has occurred. Glaucoma is actually a blanket term for a disease that comes in a significant variety of subtypes. Many people do not realize there are multiple types of glaucoma, so here is what you should know about the most common types of glaucoma.

By far the most common kind of glaucoma, over 90% of patients with glaucoma worldwide have open-angle glaucoma. Open-angle glaucoma causes pressure to build inside the eye by blocking passages inside the eye that allow fluid to drain properly. The blockage is due to the angle between the iris and the cornea being wide enough, or “open” enough, to impede the drainage canal in the eye. The angle does not necessarily completely restrict flow, but it restricts enough to cause a serious buildup of fluid. It is important to note that having high pressure in the eye does not always mean you have glaucoma, as the fortitude of optic nerves varies from person to person.

Also called angle-closure, closed-angle, or acute glaucoma, this is much less common than it’s open twin but far more dangerous. People with narrow-angle glaucoma experience a sudden buildup of fluid in the eye, as the drainage canals become completely blocked off. This type of glaucoma causes rapid permanent vision loss, has painful symptoms, and is considered a medical emergency. If you experience a sudden onset of symptoms such as halos, nausea, and find it difficult to see, you need to seek medical attention immediately.

A rare form of glaucoma, this one occurs without any significant variance in one’s eye pressure. As to why this type of glaucoma exists remains a medical mystery for now.

Other Types of Glaucoma

Glaucoma can develop without the angle in the eye being the culprit. All that matters is that the fluid flow is blocked. When tiny flecks of pigment from of the iris block the fine mesh in the drainage system of your eye, it is referred to as “pigmentary glaucoma”. Neovascular glaucoma is caused by high blood pressure or uncontrolled diabetes. Glaucoma can result from eye injuries or be a side effect of some eye surgeries.

How Is Glaucoma Treated?

Unfortunately, any damage done by glaucoma is irreversible. This is why it is so important to schedule yearly exams with your eye doctor. If we catch glaucoma early, we can prescribe medicine in the form of eye drops or pills to lower eye pressure and prevent vision loss. For those who need treatment more powerful than medicine, there are many different types of surgeries to treat glaucoma.

Bennett & Bloom is based in Louisville and Jeffersonville, Kentucky and is capable of prescribing and performing such treatments. Don’t take a gamble on the future of your vision, request an appointment today!